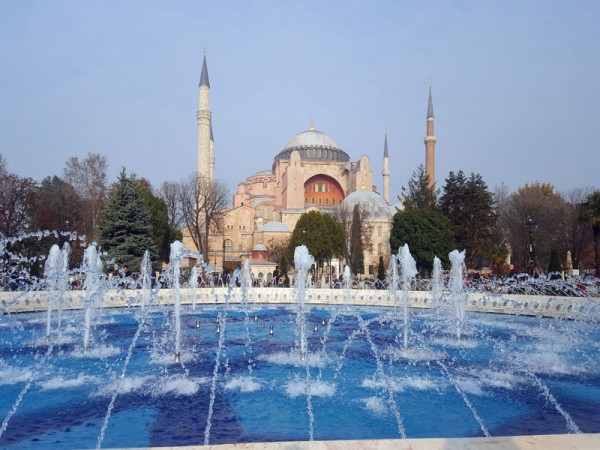 Hagia Sophia  is most visited place in Istanbul. More or less three millions tourist  visit this place every year.

There are two hagia sophia building in Istanbul .That’s why  we locals called Small and Big  Hagia sophia for these two building . This Article we want to share infomation about big one.

click link to read my articles about Topkapı Palace Museum

Hagia sophia  was constructed in only 5  years by order of Justinian the great in 6th century. According books, ten thousand construction workers and one hundreds Masters were used for its construction. Archictures  of Hagia Sophia were Anthemius (Mathematician)and Isodorus (physicist). Hagia Sophia was first building which dome and rectangular planed were  used together in one building. For construction of Hagia sophia, Lightest sands from Rodos Island  and Columns of Former Paganism Temples were used as a recycle objects.

Hagia Sophia is open every day

Off Season ( from November to April ) 9 am to 5 pm . entrance closed one hours before closing time .

High Season (from April to November) 9 am to 7 pm , entrance closed one hours before closing time

We highly recommend to visit Remarkable City  with Istanbul Guide Services.  Thanks to hiring a Professional tour guide. To have a private tour guide is  Inexpensive and efficient way to get around the city and see the important sights or  any where you want. Please feel free to contact us . And also you follow us in youtube, Facebook and instagram

Also we have nice reviews which written by our clients in tripadvisor. Please click here to read them .